Customers often tell us that their instrument’s playability is difficult and ‘stiff’, yet when we measure the action and relief, we find that the levels are appropriate for their playing style. Upon further inspection, we often find that the problem is a lack of string flexibility at the nut, but this is easy to fix and something you can do yourself.

Remove one string at a time, and place painter’s tape on either side of the nut slot. Start with 220 grit sandpaper. You only need a very small piece. Fold the piece in half for the two treble strings, and then in half again for the thicker wound strings. Make about five passes, and then use 400 grit sandpaper for another five passes. 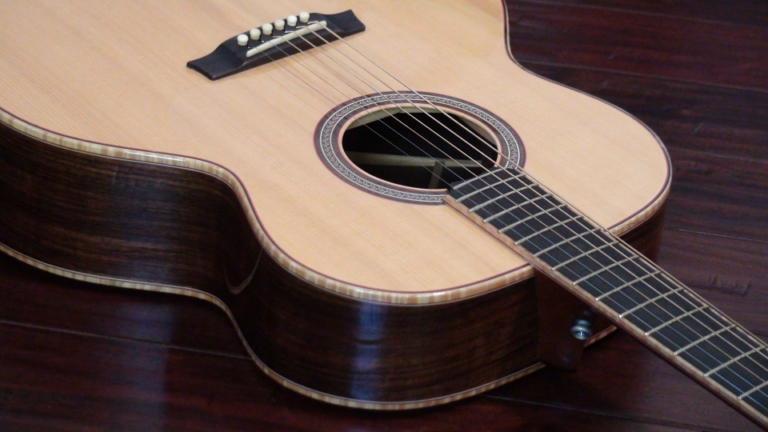 Having the strings low in the nut and pinched on the sides often produces a more subdued, mellow tone. With the wound strings about half in/half out at the nut and moving freely, but not loosely, you’ll get more sustain and “oomph”. We’ve reduced the surrounding nut height numerous times to very pleased customers. No need to get the unwound strings half in/half out, but they should be moving freely.

Another factor to consider is the player’s style. With the wound strings half in/half out, this allows for the player to be aggressive without the strings edges of the nut breaking off as the strings are strained. Please see Dan Erlewine’s Guitar Player Repair Guide.
-Step One – Remove strings and tape off all sides of the nut.

-Step Two – Draw a line for the area to be removed.

-Step Three – Use a sanding block with 100 grit sandpaper to lower and reshape the nut’s top.

For guitars with a truss rod access point at the headstock, you can get customized truss rod cover to obtain a unique look. Check out the below links.

You can upgrade your tuning machines, and a popular option is Gotoh 510 tuners, the Cadillac of tuning machines, many of which have a 21:1 gear ratio. Be sure to check your current tuners first to ensure that the various dimensions will work with your guitar, including the post hole and screw angle.

Another, but less expensive option is to change your tuning buttons, such as changing from white to ebony.

A bone saddle is a relatively easy and inexpensive change that you can do on your own – check out our How To Replace a Bone Saddle Video for tips. You will notice a significant difference in sound if your guitar has an inexpensive plastic saddle. The bone saddle is also easy to install on acoustic guitar. Please view our bone saddle offerings for different sizes and contact us with any questions.